Moralis nitro is out! 🚀

Moralis Nitro is Finally out!

This brings a whole new level of scalability and performance to Moralis.
All new servers from now on are by default Moralis Nitro.
In this post I’ll explain the different features of the update.

It’s very important to upgrade to nitro as it will be the supported version moving ahead.

The easiest way to upgrade is to create a new server from scratch and migrate all data and configuration to the new server.

Below we describe how to upgrade an existing server.

This is a change that unfortunately requires manual care as there are some breaking changes and therefore in order to upgrade we need to create a group chat with your team and upgrade together. The process shouldn’t take more than 15 minutes.

Update: You can also find the steps required to upgrade in documentation:
https://docs.moralis.io/moralis-dapp/getting-started/create-a-moralis-dapp#migrate-dapp-to-nitro-version

Moralis Nitro introduces the Core Services plugin that is automatically installed on each server.

This special plugin does all of the heavy-lifting when it comes to syncing historical and real-time blockchain data into your database.

This has many advantages:

In previous versions of the server all address synchronisation was performed on the same server.

When many users sign up at once they had to compete for resources during sync. With nitro we offload this synchronisation process into worker nodes that can process in parallel.

This allows the server to maintain an operational workload and users will see their transactions regardless of how many users sign up at once.

When you start a fresh server you’ll notice that it has 1 User, 1 Session and 1 Role right after creation.

This is by design.
You’ll notice that it has username set to coreservices.
You can think of it as a system-level user that syncs all the data into your server.
You shouldn’t remove or change it.

If you accidentally remove the coreservices User, Role or Session the data sync into your database will stop - everything will be restored on the next restart of the server and all missed events will be caught up and inserted into the different tables.

You will also notice that each new server by default has a Plugin called Core Services.
This plugin is placed there by design and is impossible to delete.

You could for example fetch user nft balances and token balances each time they login or do a Job that does it regularly and puts the data into the User row in the database.

Many dapps don’t even need to keep all tokens and NFTs of the user in sync all the time. This change allows more flexibility and allows the developer to adapt their Moralis instance to their exact use-case better.

Before Moralis Nitro we synced all user transactions into the database when a user signs in.

This created some issues with many new users logged in at the same time and user historic sync was enabled. If 1000 users sign up with 100 historical tx each - server needs to handle 100k transactions all at once. While we always had a setting in the dashboard to turn this off we’ve noticed that some dapps missed to set that setting resulting in downtime when many users signed up all at once and in most cases the developer didn’t even need full user history.

Now with Moralis Nitro only 50 historical user tx for each category (native, token, nft) and chain are synced.

And this can be adjusted in the admin settings for the particular server. 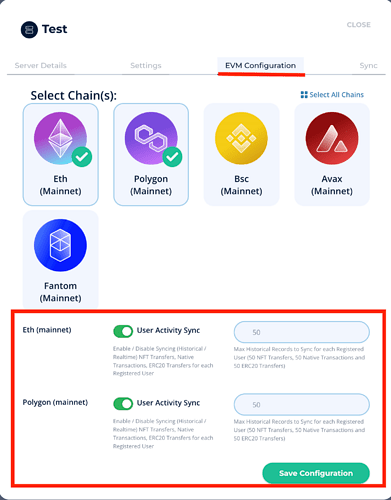 Breaking Change: beforeConsume function is now deprecated and removed.
Instead when you setup a smart contract event sync you can specify logical conditions that will give you only events that comply with the conditions.

Below are some more filter examples. You can set conditions for any variable in the event.

If an event has wei denominated values you can use <name>_decimals fields to run comparisons (like gt/lt):

Wei numbers are stored as numbers (not only strings)

When syncing transactions and smart contract events - all onchain numbers are represented as wei 256 numbers which don’t fit in traditional databases which meant that before Moralis Nitro update all such number were stored as strings in Moralis DB. This made it impossible to sort, sum, aggregate or run other queries such as LT or GT.

With Moralis Nitro - all events and transactions have a decimal column for each wei number where the actual decimal number is stored representing the wei value.

So for example if 10 ETH was transfered in a transaction Moralis would previously only show the wei value as a string. While now we also include “10” as a sortable and queryable/sortable/comparable number.

Note: the decimal value can only hold 128 bits - meaning that everything above 34 characters long will lose precision. For exact 256 bit precision - use the string values.

Losing the owner table is annoying. I was relying on this. It was useful to get all NFTs owned by a wallet (regardless of the contract). I am not sure I understand. What is the alternative?

Hey @jerome, so sorry for your inconvenience.

As an alternative, you can use the Web3 API https://docs.moralis.io/moralis-server/web3-sdk/token#getnftowners, which are widely used by other developers instead of the NFTOwners class.

Thanks. I guess I was focused on building and I missed these.

So this API will give ownership for only one smartContract, correct? How do you recommend building a databases with all NFT smart contracts used/registered by users of a DAPP?

Check this section to get all info about the user

It depends if the use case you have

Ok. Will look into that getNFTs function more

After testings, getNFTs seems to achieve my needs for now.

How to transition the test server into production in Moralis?

You have to create a new server, one specific to mainnet.